What you put in considerations when planning an Effluent Treatment Plant

Factors to consider when installing Effluent Treatment Plant (ETP) in a Factory.

Any factory needing to install an Effluent Treatment Plant ETP has to consider several factors. For example, information about the wastewater from the factory is required, including quantity and quality. To get this information the factory will have to take samples and have them analysed at a reputable laboratory.

Effluent can be treated in a number of different ways depending on the level of treatment required. These levels are known as:

The mechanisms for treatment can be divided into three broad categories: physical, chemical and biological, which all include a number of different processes. Many of these processes will be used together in a single treatment plant

A screen with openings of uniform size is used to remove large solids such as cloth, which may damage process equipment, reduce the effectiveness of the ETP or contaminate waterways.

There are several different steps in the textile dyeing process and therefore wastewater quality and quantity varies over time. Effluent Treatment Plant ETPs are usually designed to treat wastewater that has a more or less constant flow and a quality that only fluctuates within a narrow range. The equalization tank overcomes this by collecting and storing the waste, allowing it to mix and become a regular quality before it is pumped to the treatment units at a constant rate. To determine the required volume of an equalization tank the hourly variation of flow needs to be determined.

The flocs formed in flocculation are large enough to be removed by gravitational settling, also known as sedimentation. This is achieved in a tank referred to as the sedimentation tank, settling tank or clarifier. Sedimentation is also used to remove grit and suspended solids, to produce clarified effluent, and to thicken the sludge produced in biological treatment.

Flocculation and sedimentation should remove most of the suspended solids and a portion of the BOD.

Aeration is required in biological treatment processes to provide oxygen to the microorganisms that breakdown the organic waste (this is described in more detail in the biological treatment section). Two main methods are used for this, either mechanical agitation of the water so that air from the atmosphere enters the water, or by introducing air into the tank through diffusers.

Waste from textile industries is rarely pH neutral. Certain processes such as reactive dyeing require large quantities of alkali but pre-treatments and some washes can be acidic. It is therefore necessary to adjust the pH in the treatment process to make the wastewater pH neutral. This is particularly important if biological treatment is being used, as the microorganisms used in biological treatment require a pH in the range of 6-8 and will be killed by highly acidic or alkali wastewater. Various chemicals are used for pH control. For acidic wastes (low pH) sodium hydroxide, sodium carbonate, calcium carbonate or calcium hydroxide, may be added among other things. For alkali wastes (high pH) sulphuric acid or hydrochloric acid may be added. Acids can cause corrosion of equipment and care must be taken in choosing which acid to use. Hydrocholoric acid is probably better from an environmental view point but can corrode stainless steel therefore plastic or appropriately coated pumps and pipes must be used.

Coagulation is a complex process but generally refers to collecting into a larger mass the minute solid particles dispersed in a liquid. Chemical coagulants such as aluminium sulphate (alum) or ferric sulphate may be added to wastewater to improve the attraction of fine particles so that they come together and form larger particles called flocs. A chemical flocculent, usually a polyelectrolyte, enhances the flocculation process by bringing together particles to form larger flocs, which settle out more quickly. Flocculation is aided by gentle mixing which causes the particles to collide. 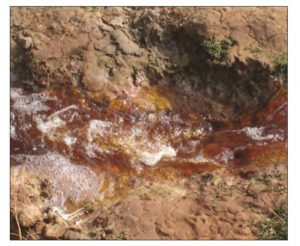 With suspended growth systems microbes grow in small aggregates or “flocs” (this is known as activated sludge). Activated sludge (AS) leaves the reactor with the treated effluent but is settled out in a clarifier and returned to the aeration unit to recycle the bacteria. If the amount of AS is excessive some may be disposed of rather than being recycled.

In fixed film systems the microbial population grows as a thin layer (a “bio-film”) on the surface of an inert support medium. The classical fixed film system is known as a percolating or biological filter and uses small stones as a medium to support microbial growth. In the more modern system microbes grow on plastic supports. In the traditional percolating filters effluent is sprayed over the medium and trickles through a packed bed with oxygen entering from the air. In more recent reactor designs, the medium (usually plastic) is submerged in effluent and air is blown into the base of the reactor. Traditional percolating filters require large areas of land and are unlikely to be of use in Bangladesh due to land costs. Submerged fixed film reactors using plastic media require much less land.

Fixed film systems require a final clarifier to remove particles of biofilm that become detached from the medium. However, this material is not recycled to the reactor.

While most of the activated sludge is recycled some may be surplus to requirements and needs to be disposed of, as does detached biofilm from fixed film reactors. This material must be disposed of appropriately so that the pollutants now present in this sludge do not enter the water cycle. The treated liquid is discharged to the environment or taken for further treatment depending on the desired standard of effluent quality or the required use of the wastewater.

Biological treatment plants must be carefully managed as they use live microorganisms to digest the pollutants. For example some of the compounds in the wastewater may be toxic to the bacteria used, and pre-treatment with physical operations or chemical processes may be necessary. It is also important to monitor and control pH as adverse pH may result in death of the microorganisms. The ETP must be properly aerated and must be operated 24 hours a day, 365 days a year to ensure that the bacteria are provided with sufficient “food” (i.e. wastewater) and oxygen to keep them alive.

Like humans, microorganisms need a “balanced diet” with sources of carbon, nitrogen, phosphorus and sulphur. While textile wastes have enough carbon and sulphur (sulphate) they are generally lacking in nitrogen and phosphorous containing compounds. If the microorganisms are to grow and work effectively they are likely to need addition of nutrients. Normally materials such as urea and ammonium phosphate are added. It is possible to replace these nutrients by substituting the liquid portion of effluent from toilets, which is rich in nitrogen and phosphorus containing chemicals (the solid portion may cause problems).

Both activated sludge and fixed film systems can produce high quality effluent but both have advantages and disadvantages. In the AS process, the settling and recycling of AS to the aerobic reactor is vital, and the settling process can be difficult to accomplish. Fixed film systems do not require recycling of biomass and so do not have this problem.